May 04, 2020
I do not usually post things like this but it's been on my mind off and on.  The fact that I feel that I cannot be honest on my own blog because it's not nice or proper or might hurt someone's feelings.  I already guard my posts on FB and Insta just to be sure I do not harm anyone's delicate littler feelers.
But I decided after getting bored enough to scroll TikTok that if people can make videos of what ever ails them, I can certainly post to a blog that nobody reads.

I was married before.  It lasted from 1990 to 2009.  I was 18 when we got married and he was 38.  He had two little boys that he had full custody of; we did not have children of our own.  It started off all well and good, and full of hope but it did not stay that way.  It was not a good marriage.  Or at least the last 10 years of it was not.  I know now, that for at least the last seven years of it my former spouse was cheating.  Before that he was just a controlling narcissistic bully.  I will call him Tim, Tim Skipper.  His name.  I protected him enough while I was married; I do not have to any more.

Let us fast forward through years of bullshit to 2007.  Tim and I had bought a second home in Honduras.  Tim, as a son of missionaries, grew up in Honduras and wanted to retire there.  The home was on a lake and it would enable us to retire together, supposedly.  We had gone to Honduras together in June, our usual time, and despite taking preventative medication I contracted both Malaria and Dengue Fever.  To say I was miserable and very ill would be a huge understatement.

I was scheduled to fly home alone, with Tim following two weeks behind so he could "close up the house".   I did not want to fly home alone.  I begged him to come with me.  He being passive aggressive turned it into me asking him to spend an enormous amount of money to change his ticket so being the good wife, I relented.  I mean really, if I didn't give in, then I was just wrong.  He would quote some ill cited bible verse that it is better to live in the mountains than live with a nagging woman.

So I board the plane in San Pedro Sula.  The flight attendant stops me to ask me if I am ok.  I lie through my teeth that I am just dizzy and "giggle maybe I'm pregnant".  I was terrified that if anyone knew how ill I was with a communicable disease they would not let me enter the U.S.  My ears were ringing from the large doses of Tylenol and Ibuprofen.  I landed in Miami, went in the bathroom, took my temperature, 102.  Dosed up more and trudged through customs.

When I finally arrived in Portland and got into the doctor she gave me two choices: go immediately to the hospital or agree to come to the office every morning and a phone call with her every evening.  With the added agreement that at any time, if I deteriorated I would call 911.  The health department began their required interview and contact tracing.  It was a mess.  I WAS ALONE.

I called Tim in Honduras.  A woman answered the cell phone, I hung up.  He called back minutes later with some story about someone else answering his phone by mistake.  I knew what was up, but he just kept telling me I was imagining it.  Or that maybe I needed to "up my depression medication".  I again begged him to come home.  He did not

He finally flew home two weeks later.  And a few days after that I found an email of him talking to a friend that he needed "sopa de viagra" to keep up with his amore.  That started the painful and abusive end to our marriage.  It was filled with his begging for forgiveness, promises, lies, manipulations..blah blah blah.

Why does this matter now.  Oh well because now, Tim is a missionary.  Now Tim quotes the Bible, only in the KJV translation because that is the only "true translation". Because didn't you know that Jesus spoke old English (sarcasm). Tim and his "amore" Carolina, his wife now, are very devout Christians.  They spread the gospel by going out to eat and posting on Facebook.  And one of those pictures he posted this last week 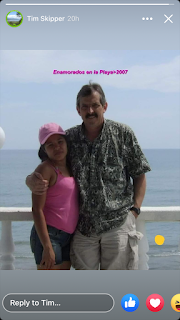 I know the ride she is on.  She is Tim's fourth wife.  She has grabbed onto someone who can provide for her with his police pension and home bought by his parents.  But her ride is bumpy.  Now she has to walk the line.  The line that if you cross you are "sinful".  I don't know how it feels to go from being a mistress to being the wife.  Can you ever really trust?  Not my problem, nor is it my shame, it's his and hers.

To me this picture is justice.

May 11, 2010
I yelled that once. Not really yelled, more like exclaimed it loudly and with panic. Panic caused by the fear of projectile vomit coming out all over me and everyone else at the table. I was on Roatan, with two friends, Missy and Prissy. We had been "dolphin trainers for a day" and had chosen to buy the cheap lunch with the locals. We were told they had only two plates of fish left and than the conejo. Conejo is spanish for "rabbit". So I made the sacrifce and let the twins have the fish. It's not my favorite meat, but I figured what the heck..when in rome... All was good until the american dolphin trainer walked by and was kind enough to tell me that "conejo" wasn't the "rabbit" I was thinking of. She said the magic word.."Watusa" Abruptly a plate with rice and fried plantain appear with a dark sweet smelling meat...Watusa. That's when the yelling came in and the controlled gag reflex fyi....Watusa is a damm r
2 comments
Read more

In anticipation of my 40th birthday

May 22, 2012
These are just a few of the things I've learned... Just because you can do something doesn't mean you should do it. If my dogs don't like you, there's a good reason. Wearing the right size bra makes all the difference. I'm not as secure as I appear, and neither are other people. Keyless entry remotes are very helpful in finding your car in a parking lot..honk and look. Red wine makes me sweat. If you can't say anything nice, come sit by me, I'll do my best to keep you out of trouble. I am my own worst critic and the only one that matters. If you think about someone far more than they think about you, you need to re-think your thinking! And my own personal motto.... Pray like you mean it, Love like you mean it, so you can live like you mean it. Later, J
Post a Comment
Read more

April 20, 2020
First of all I am not trying or wanting to be a blogger that is touting their idealistic lifestyle nor do I want to be an influencer.  I am just a person who likes to blog and share a small glimpse of my imperfect life.   I am saying all of that because I am posting unedited pictures of my cooking.  Most of my pictures are un-edited.  I crop to keep certain details out of pictures.  Like I cropped a couple of these photos so you cannot see the chipped countertop on the edge of my stove.  Come to think of it I shouldn't have cropped that.  I cannot be the only person who has a chipped countertop.  Oh well Onward! I did some online shopping at Target.  I miss Target.  I mean I really really miss Target, it is one of my very favorite stores.  When we are not in a pandemic I love that I can order online and walk in a pick it up.  It keeps me from experiencing the bloated cart that comes from cruising Target aisles. I wanted some baked goods but I did not want to waddle after the
Post a Comment
Read more