September 22, 2011
I grew up in Canby, Oregon. It's a small town, what some would call a bedroom community for Portland, but when I was young it was more a farming community. Few people commuted every day into Portland. There were three grocery stores in town. Hi-way market, Cutsforth's Thriftway and Roth's IGA. Dad shopped at Roth's, my dad called the others, "Cut throats and Hi way robbers". But Mom shopped at Cutsforth's, don't ask I can't tell you why they shopped at different stores, but they did. There were three pharmacies, but no big clothing stores. No Fred Meyers. So when we needed clothes or shoes or home furnishings we went into Oregon City to J.C. Penney. I remember school shopping and dress shopping all at Jacque Pen Wahh. Than we would have hot Roast Beef sandwiches at the PineWood Restaurant. Good memories, good time. As you travel from Canby to Oregon City along 99E you go through a tunnel right past a large paper mill. One that has been there for 100 years. What my Dad told me, and what I believed until I was 7 or 8, was that it really was a cloud factory. The weatherman would call up in the morning and order how many clouds were needed. So when we drove by I would count the clouds and predict the weather. The cloud factory is closed now. It has a long history, was eventually purchased by it's employees, but couldn't survive the current economic misery. Goodbye cloud factory, I'll missyou 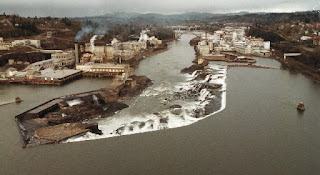 May 11, 2010
I yelled that once. Not really yelled, more like exclaimed it loudly and with panic. Panic caused by the fear of projectile vomit coming out all over me and everyone else at the table. I was on Roatan, with two friends, Missy and Prissy. We had been "dolphin trainers for a day" and had chosen to buy the cheap lunch with the locals. We were told they had only two plates of fish left and than the conejo. Conejo is spanish for "rabbit". So I made the sacrifce and let the twins have the fish. It's not my favorite meat, but I figured what the heck..when in rome... All was good until the american dolphin trainer walked by and was kind enough to tell me that "conejo" wasn't the "rabbit" I was thinking of. She said the magic word.."Watusa" Abruptly a plate with rice and fried plantain appear with a dark sweet smelling meat...Watusa. That's when the yelling came in and the controlled gag reflex fyi....Watusa is a damm r
2 comments
Read more

In anticipation of my 40th birthday

May 22, 2012
These are just a few of the things I've learned... Just because you can do something doesn't mean you should do it. If my dogs don't like you, there's a good reason. Wearing the right size bra makes all the difference. I'm not as secure as I appear, and neither are other people. Keyless entry remotes are very helpful in finding your car in a parking lot..honk and look. Red wine makes me sweat. If you can't say anything nice, come sit by me, I'll do my best to keep you out of trouble. I am my own worst critic and the only one that matters. If you think about someone far more than they think about you, you need to re-think your thinking! And my own personal motto.... Pray like you mean it, Love like you mean it, so you can live like you mean it. Later, J
Post a Comment
Read more

April 20, 2020
First of all I am not trying or wanting to be a blogger that is touting their idealistic lifestyle nor do I want to be an influencer.  I am just a person who likes to blog and share a small glimpse of my imperfect life.   I am saying all of that because I am posting unedited pictures of my cooking.  Most of my pictures are un-edited.  I crop to keep certain details out of pictures.  Like I cropped a couple of these photos so you cannot see the chipped countertop on the edge of my stove.  Come to think of it I shouldn't have cropped that.  I cannot be the only person who has a chipped countertop.  Oh well Onward! I did some online shopping at Target.  I miss Target.  I mean I really really miss Target, it is one of my very favorite stores.  When we are not in a pandemic I love that I can order online and walk in a pick it up.  It keeps me from experiencing the bloated cart that comes from cruising Target aisles. I wanted some baked goods but I did not want to waddle after the
Post a Comment
Read more